The Anglo-Russian Research Network has a new website. Please check https://anglorussiannetwork.wordpress.com/ for all updates about our activities, and a growing archive of podcasts, research resources, and articles.
Posted by Matthew Taunton at 1:50 AM No comments:

This interdisciplinary conference will look at the scope and nature of Soviet culture disseminated in Britain and significance of cultural relations with the USSR in Britain. It will ask what mechanisms of cultural exchange existed, how Soviet culture was presented to the British public and specialists, and what influence these relations exerted on British writers, creative artists and professionals in fields as diverse as law, music and architecture. It will examine the intersection of this subject with related fields and the methodological challenges associated with approaching literature and culture in a highly politicized context.

The event will be held at the Society for Co-operation in Russian and Soviet Studies, 320 Brixton Road, London  SW9 6AB.

The cost, including refreshments, is £20.  Please book via the online store here.

This event is sponsored by BASEES
Posted by Matthew Taunton at 12:00 PM No comments:

Reading Group: Simon Dixon on the Russian Orthodox Church and Anglicanism in the Nineteenth Century, 2 May

Professor Simon Dixon, Sir Bernard Pares Chair of Russian History at UCL SSEES, will be leading our next reading group, which will focus on the relationship between the Russian Orthodox Church and Anglicanism. The session will take place on 2 May from 5.30pm-7.30pm at Pushkin House, Bloomsbury (www.pushkinhouse.org). We will be circulating the texts by email soon.

It is generally supposed that, before the era of W.J. Birkbeck, relations between Anglicans and the Russian Orthodox Church were the preserve of eccentrics on both sides: maximalists such as William Palmer of Magdalen predictably ran into a brick wall; no leading figures were involved.  I hope to suggest a rather different picture by highlighting the role of two leading Russian laymen: Count Aleksandr Tolstoi, chief procurator of the Holy Synod after the Crimean War, and his anglophile friend, Count Evfimii Putiatin, who combined an expertise in the latest naval technology with ultra-Orthodox piety.  Though eccentrics are certainly to be found (the convert Stephen Hatherly was one), by concentrating on the period 1840 to 1870 we might throw light on a wider set of concerns, focused partly on hostility to Roman Catholicism and partly on the tensions between pan-Slavism and pan-Orthodoxy.
Biography

Born in Lancashire, where he learned Russian at Bolton School, Simon Dixon graduated in History from Sidney Sussex College, Cambridge, where he held a Junior Research Fellowship after studying for a PhD at the School of Slavonic and East European Studies.  Having spent nine years lecturing at the University of Glasgow, he was Professor of Modern History at the University of Leeds from 1999 to 2008 before moving to the Sir Bernard Pares Chair of Russian History at UCL SSEES.

The Anglo-Russian Research Network organises termly reading groups for those interested in the interactions between British and Russian culture and politics in the period c.1880-1950. These are informal events with plenty of discussion and wine. Anyone who would like to is very welcome to come along with us for dinner at a local restaurant--it would be helpful to know in advance if you're planning to come to dinner so that we have some idea of numbers. Please contact Matt Taunton or Rebecca Beasley if you would like to attend.

Posted by Matthew Taunton at 11:58 AM No comments:

We are pleased to announce that Philippa Burt will be leading our next reading group, which will focus on the life and work of Theodore Komisarjevsky. The session will take place on February 21st from 5.30pm-7.30pm. The reading material will be circulated soon, so please contact Matt Taunton or Becky Beasley if you would like to attend and we'll send you the texts.

The focus of this session will be the Russian theatre director Theodore Komisarjevsky, who lived and worked in Britian between 1919 and 1939. During his time in the country, Komisarjevsky staged a series of productions at the Shakespeare Memorial Theatre, regularly directed leading actors such as John Gielgud, Peggy Ashcroft and Charles Laughton, and has often been credited with making Chekhov popular with British audiences. However, Komisarjevsky's work was always interpreted through the prism of his national identity, where critics argued that his successes and his failures were due to him being foreign and, in particular, Russian. I am interested in examining how Komisarjevsky negotiated his status as a Russian emigre in inter-war Britain with reference to his own writings and whether his experience was comparable to other Russian emigres in Britain at the time.

Philippa Burt is currently completing her doctorate at Goldsmiths, University of London under Professor Maria Shevtsova. The focus of her thesis is the ideal of ensemble practice in twentieth-century British theatre, where she charts the underlying influence of Russian theatre on British directors.

Posted by Matthew Taunton at 4:12 AM No comments:

The Anglo-Russian Research Network will be holding its autumn reading group at 5:00 on Friday 4 October at Pushkin House, Bloomsbury (www.pushkinhouse.org). The discussion will be led by Kimberley Reynolds, Professor of Children’s Literature at Newcastle University.

1 Draft of Kimberley’s chapter on children’s books about the Soviet Union published in Britain in the 1930s and 1940s.

‘The material to be discussed is based on a chapter I am writing for a book about the radical children’s books of the early twentieth century that do not feature in established histories of children’s literature. This chapter looks at representations of the Soviet Union in children’s books published in the 1930s and 1940s in the UK. The chapter will also cover books from the USSR that were published here in translation, but I have not included any of these in the extracts for discussion. Most of the works I discuss are forms of travel writing in that the children in them move between different cities, resorts and regions and give their impressions of the people and projects they see. My interest, and where I will particularly appreciate guidance from the group, is in the way the Soviet experiment was being presented to British children.’

It would be helpful if you could let Rebecca Beasley (rebecca.beasley@ell.ox.ac.uk) and/ or Matthew Taunton (M.Taunton@uea.ac.uk) know if you plan to attend, and you will be supplied with digital copies of the reading. All are welcome. The discussion will finish at 7, and anyone available is very welcome to join us for dinner nearby.

The Anglo-Russian Research Network organises termly reading groups for those interested in the interactions between British and Russian culture and politics in the period 1880-1950. These are informal events with plenty of discussion and wine.

Posted by Matthew Taunton at 3:34 PM No comments:

ARRN Podcast 3: Emily Lygo on the Society for Cultural Relations with the USSR

The third ARRN podcast is now available for streaming or download. Click below to hear Emily Lygo introduce text relating to the Society for Cultural Relations with the USSR. If you would like to be sent these texts by email, please contact Matthew Taunton or Rebecca Beasley.

Posted by Matthew Taunton at 5:41 AM No comments:

Emily Lygo on the Society for Cultural Relations with the USSR, 7 June, Pushkin House

At our next reading group, we are delighted to welcome Dr Emily Lygo, Lecturer in Russian at the University of Exeter.  Emily will be introducing texts relating to her research on the history of The Society For Cultural Relations Between the Peoples of the British Commonwealth with the USSR. The reading materials are as follows:

1. An article by Emily Lygo, 'Promoting Soviet Culture in Britain: the History of the Society for Cultural Relations Between the Peoples of the British Commonwealth and the USSR, 1924–45', Modern Language Review Vol. 108 No. 2 (April, 2013)

2. Preface and argument to the book The New Spirit in the Russian Theatre by Huntly Carter, 1929

3. A 1946 edition of the Anglo-Soviet Journal, available online here.

If you would like to attend, please contact Matt Taunton or Becky Beasley and we will send you the reading materials in pdf format. 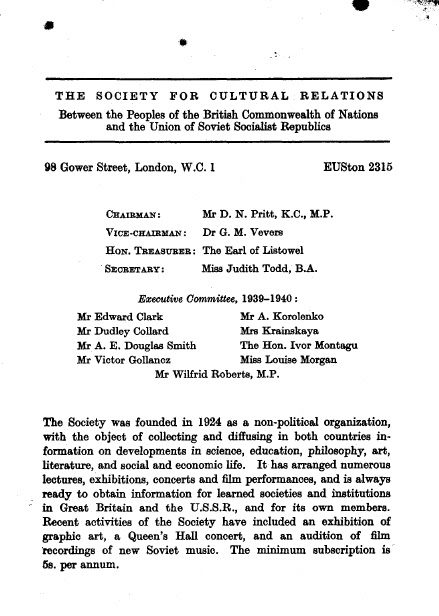 Posted by Matthew Taunton at 9:17 AM No comments:

Please contact Dr. Rebecca Beasley (rebecca.beasley@queens.ox.ac.uk) and Dr. Matthew Taunton (m.taunton@uea.ac.uk) if you are interested in joining the network or attending one of our reading groups or events.

The Anglo-Russian Research Network was established in 2011 to bring together research students and scholars interested in the influence of Russian and Soviet culture and politics in Britain in the period 1880-1950. The network benefits from the support of Pushkin House and the Leverhulme Trust.